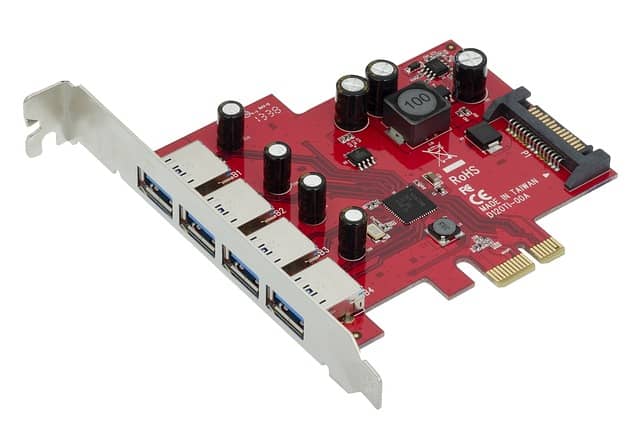 Per lane (each direction) | 16x equivalent:

GT/s is gigatransfers per second. This Wikipedia page has more information on transfers.

What is PCI Express?

PCI Express, PCIe or the Peripheral Component Interconnect Express, is the standard type of connection for internal components. This is the expansion slots on a motherboard that align vertically under the CPU socket.

PCIe has replaced PCI, AGP, and ISA commonly used connection types. PCIe is so much of a standard that you can’t buy a motherboard today that doesn’t have one of these expansion slots.

PCIe is so popular that it’s not expected for a new expansion type to replace it for some time to come.

Update: in fact, PCIe 5.0 will be expected to debut in late 2019 with broader availability in 2020. The linked Tom’s Hardware article also has some pretty graphs to look at as well to see the PCIe bandwidth increase over the years.

That’s all for now with this PCI Express bandwidth article. More to come!

This site, Davis Tech Media, is owned and operated by Davis Tech Media LLC (DTM), a limited liability company headquartered in Florida, USA. DTM is a participant in the Amazon Services LLC Associates Program. As Amazon Associates, we earn from qualifying purchases at no additional cost to you. DTM will also participate in affiliate programs with Udemy and other sites. DTM is compensated for referring traffic and business to these companies.