Your Trolling Definition is Wrong 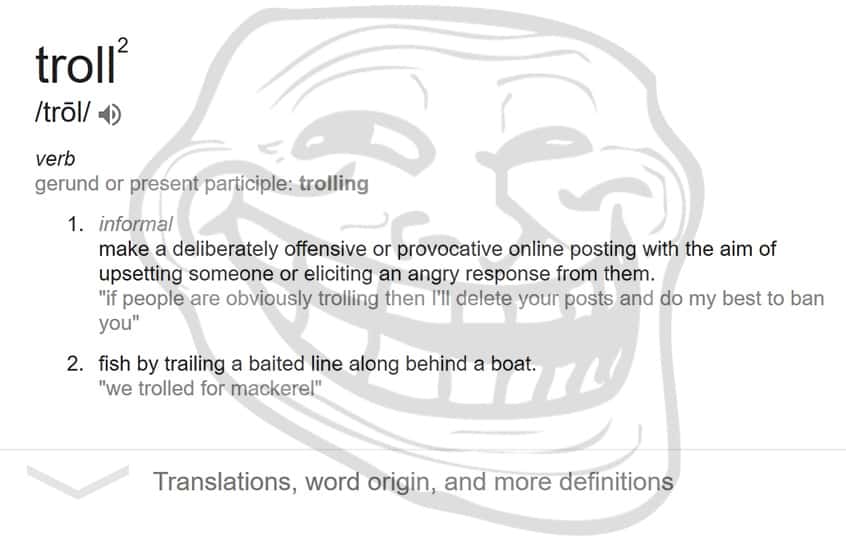 It’s always good to keep your door open to constructive criticism when creating documents or anything else for that matter. Sometimes you get amazing feedback and sometimes you just get noise.

I’m sure you’ve experienced both ends of the feedback spectrum.

In the interest of learning and discussion, I would like to share an experience with you. If you stick around you may learn something, or at the very least laugh at my expense. Both are acceptable reactions. 🙂

Before I dive into my experience, I need to set up some background information. I had drafted a document on Computer Ethics and Acceptable Usage 3 months prior to an impromptu meeting. I’m not sure why this particular co-worker, let’s call him Jeff, decided not only to review this document but review it this particular day. He walks in and the following conversation took place:

Jeff: Where did you get those words from?

Me: What are you referring to?

Jeff: Where did you get those words in the ethics and acceptable usage document?

Me: So far I’m seeing my own words, which words do you have in mind?

Jeff: This section here, with the bullets.

– I began to read the 5 sentences aloud…

Jeff: You don’t need to read the section.

Me: I wrote this document 3 months ago, I need to refresh my memory… Yes, I wrote this section with my own words.

Jeff: Trolling doesn’t mean what you think it means.

– I re-read the sentence in question: “Keep from intentionally or passively aggressively agitating someone, also known as trolling.”

Me: What is your definition of trolling?

Jeff: Trolling is obtaining IPs for network administration. It could also mean running a line in water. Your definition of trolling is wrong. Where did you get it?

Me: It’s generally understood on the internet, especially in forums and social media. Users who deliberately say or comment on things just to get a rise out of you are referred to as “trolls.”

– Jeff.exe has stopped working. No seriously, he gives me the most confused, puzzled look I have ever seen. He must have used all 42 muscles in his face. After a brief pause…

Jeff: I don’t like your usage of the words trolling, flaming, or netiquette. All those words can go, no one will know what they mean. Also, this section about separation can’t be enforced. Employees who no longer work here won’t follow this section.

Me: This section was referring to the expectation…

Me: It needs to be more specific? Got it.

Jeff: No, it needs a better scope. How can you expect separated employees to follow this section?

Me: I was setting the expectation that employees will continue to work consistently when they know they will be separating and keep their issued equipment and accounts safe and not deliberately try to take or harm anything.

Jeff: They will already have agreed to keep their equipment safe in another policy. This would be redundant. Also, we need to define what an administrator is.

– After a few other non-related complaints and asking me how many places I keep my drafts, Jeff walks out of my office.

Me: Thanks for the feedback.

I tried to be as polite and helpful as possible during the exchange. I even took notes. But there were 2 major things I noticed:

Even though this conversation was doomed from the start I think it was handled pretty well.

Considering Jeff had never given me a compliment and always had to find something wrong with my work, I actually took it as a compliment that in a document with the potential to change the dynamic of the IT department, he could only argue semantics and not argue any of the actual topics presented.

In a lovely bit of situational irony, Jeff was actually trolling me. But not by my definition of course.

Have you attempted to define trolling in your organization? How did it go?

Update 1/27 : It has come to my attention via direct message that since Jeff is older than me he may not have been exposed to the informal meaning of trolling as we know it. Ignorance is definitely possible, but I’m less likely to be content with that possibility since he was so adamant about proving me wrong. A few things worth mentioning:

Instead of thinking “I already know that” or “everyone else is wrong,” I wanted to make sure what I believe is correct. So I looked it up: