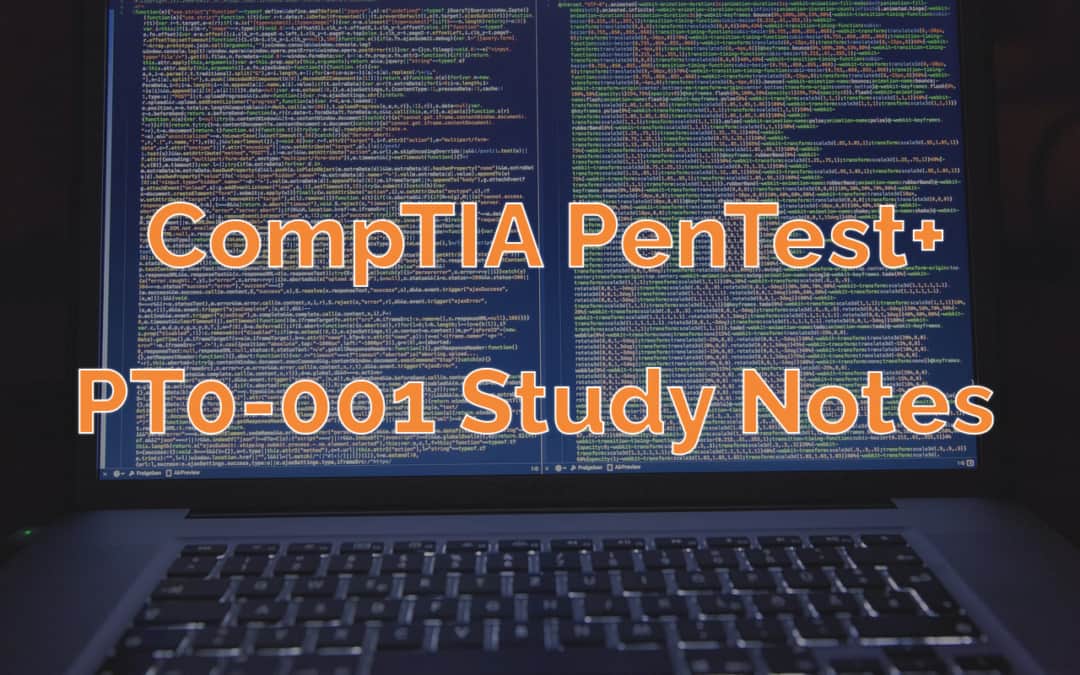 Welcome to the CompTIA PenTest+ PT0-001 exam study notes. You know the type of study guides to expect by now. Prepare for a wall of formatted text.

The information in this guide is organized by the PT0-001 exam objectives and contains information from Michael Solomon’s LinkedIn Learning course (outdated, but good), internet searches, and my own experience.

This certification heavily leans towards practical experience. In addition to reviewing notes, you need to practice! You don’t have to memorize a whole lot of random computer facts, but you still have prep work to do!

I encourage you to follow along with the activities as you learn the course. I wrote up a separate Home Lab Setup guide that details Michael’s practical activities. I also fix and update a good portion of it so that it is relevant to you.

Treat these notes as a review. You should be shaking your head yes as you go through these notes. Learn and retain as many concepts as possible. There’s no shortcut to being a security pro. Put in the work and do great.

Take a look at the Penetration Testing Execution Standard. There are 7 defined sections of a penetration test:

Don’t skip steps as you may miss an exploit or scope the entire test improperly. It is easy to waste time and effort on a big project. Experience is beneficial but you need Project management skills. They are important as they keep pen tests on track. Every environment will be different.

Why is there a pentest? Learn the rules of engagement. What are the schedule or temporal restrictions? Who is the target audience? Learn the overall goal and plan accordingly.

Scheduling is very important. A schedule lays out restrictions and further rules of engagement.

What are off limits? Find out how much work you have to do and don’t do more than that. Anything extra, no matter how small, is scope creep. Clearly define the scope to avoid scope creep. What is the technical, physical, or personnel scope? What are the target limits (inclusions, invasiveness, etc.)?

There are risks with pentesting. There is access to confidential information, crashing devices, services, whole servers, corruption, and/or degradation of performance. TOS, regulation, legislation violations.

Learn who to communicate with. Don’t only communicate when things go poorly. Start, stop, finishing milestones are common triggers. Learn other communication expectations, content, triggers, and frequency. Communicate as much as they want.

Know who is sponsoring the pen test and why. What does each party provide regarding resources? Are your activities known or secret?

When does the engagement begin?

Protect the confidentiality of findings. Do not have a lack of administrative oversight.

What does each party (you provide and what does the client) provide?

Don’t underestimate the impact of an accurate budget. How much will each section of the test cost? Every task in the test should have a value. Want to add more tests? That will cost more. One of the most important factors. Directly impacts available resources and time.

Document expected impact of pen tests. provide an estimate of remediation activities. The result of testing. Report vulnerabilities. Report expectations to stakeholders. Estimate of time required to complete remediation recommendations. How should the client respond?

Black box testers generally don’t have access. Find out if any internal resources are available. Look for artifacts from application development. Also, look for any deployment or support documents.

Always get written permission. Find out if you need 3rd party permission as well.

How much risk is the client willing to accept?

Adversary tier – what role should the pen tester assume?

Scanning helps to determine what is “out there.”

Many types of scan targets

netcat, nc, ncat, and hping can all help craft packets.

Crafted packets can help determine where and what a target is.

Wireshark is a common packet capture and inspection tool.

Useful to see what is being sent between nodes.

Decompiler – attempts to convert executable instructions back into source code.

Decompilers and debuggers can help to see what a program is doing.

Running an executable in a controlled manner.

A structured approach to examining targets to identify known weaknesses.

Compliance – scan for specific known vulnerabilities that would make a system non-compliant.

Leveraging information to prepare for exploitation.

Prioritize activities in preparation for the penetration test.

Social engineering is all about getting an authorized user to do your dirty work.

Relies on most peoples’ willingness to be helpful.

Phishing is attempting to get a valid user to click on a link to your exploit.

Spear phishing is all about targeting a specific individual.

Crafting a realistic email is crucial.

The goal is to get a user to click on the link you sent without too much prior thought.

A good social engineering attacker can smooth-talk their way around many controls.

Various Wi-Fi scanners and related tools can be found on many platforms including Android.

Injections – inserting additional input data beyond what is expected.

XSS and XSRF both use client/server interaction to launch attacks based on specially crafted links or scripts.

Any software developer shortcuts can make an attacker’s job easier.

What to do once you’re in.

Once you have exploited a target, use these to make sure you can get back in:

Used to evaluate a configuration to determine if it’s compliant with a standard or regulation.

NCAT and NETCAT can:

pwdump is a utility that needs to be downloaded.

Why bother with scripts?

What is a script?

PowerShell is a Windows-based admin and automation shell. A powerful scripting language.

PowerShell scripts are disabled in Windows by default. To enable, open an elevated PowerShell terminal and type:

Doesn’t handle errors very well as it is a basic script. Scanning Kali box will throw and error as Kali doesn’t accept connections on port 80.

Ruby is a powerful object-oriented language that can do far more than just scripting. A powerful multipurpose language.

Python is another powerful (multipurpose) object-oriented language. Not just used for scripting. Python is a popular language because it’s easy to write very powerful programs in just a few lines of code.

Not an elegant way to establish targets, kind of a brute force way to match other examples. Would require a little more code to do it right.

Tips for writing a report

Your report will be your voice after you leave

Good communication is critical to the penetration test success.

The Pentest report is your best opportunity to leave a lasting message.

YEAH. We did it. Over 8K words of CompTIA PenTest+ PT0-001 goodness. Let me know what was easy for your and of course, what you had trouble with.

Update: This will do it for CompTIA certifications for now. Next up on my list, is the CCSP from (ISC)²!

This site, Davis Tech Media, is owned and operated by Davis Tech Media LLC (DTM), a limited liability company headquartered in Florida, USA. DTM is a participant in the Amazon Services LLC Associates Program. As Amazon Associates, we earn from qualifying purchases at no additional cost to you. DTM will also participate in affiliate programs with Udemy and other sites. DTM is compensated for referring traffic and business to these companies.