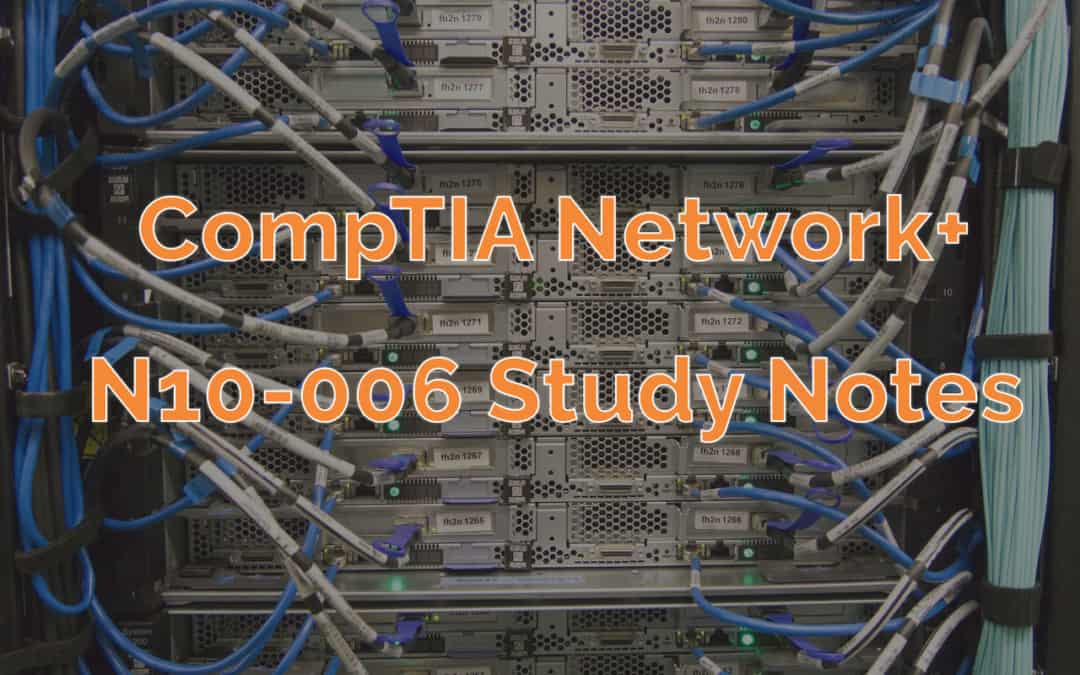 Welcome to the CompTIA Network+ N10-006 study notes. This is the biggest study guide yet! So a fair warning if you have a weak PC.

As much as I wanted to throw in images and videos, it just made this article load too slow.

Some of the information in this guide came from some knowledge I had being in the industry and taking the exam many years ago. I’m also working in the network division at my place of work and have many talented network people to pull from. Most of the other parts came from random articles including Wikipedia and a few YouTube videos.

I did not order this guide by the N10-006 exam objectives exactly but it’s close. I also compared the information and structure to other publicly available study notes out there so it’s as uniform as possible.

Know going into this that you won’t retain all industry knowledge at all times. I’ll happily admit I don’t have this entire page of notes memorized. What’s more important is taking notes and knowing where to look when you need to recall something or fix an issue.

Treat these notes as a review. You should be shaking your head yes as you go through these notes. Learn and retain as much of the concepts as possible. There’s no shortcut to being an IT pro. Put the work and and do great.

Mnemonics to help remember the order:

Decimal to binary conversion is 2 based

Half Duplex vs. Full Duplex

Assignable IP Addresses in a Subnet

Routers will not route to these addresses:

Characteristics of a Routing Protocol

Crossover vs. Straight Through

Wowzers. We did it. Over 20K words of CompTIA Network+ N10-006 goodness. Let me know what was easy for your and of course, what you had trouble with.

Update: If you’re interested in going further, the next certification that makes sense is the CompTIA Security+ exam. Head over to the SY0-401 exam overview to read more. When you’re ready for the exam, jump into the SY0-401 exam study notes post to review your stuff. Study hard, this one has a lot of different concepts to learn!